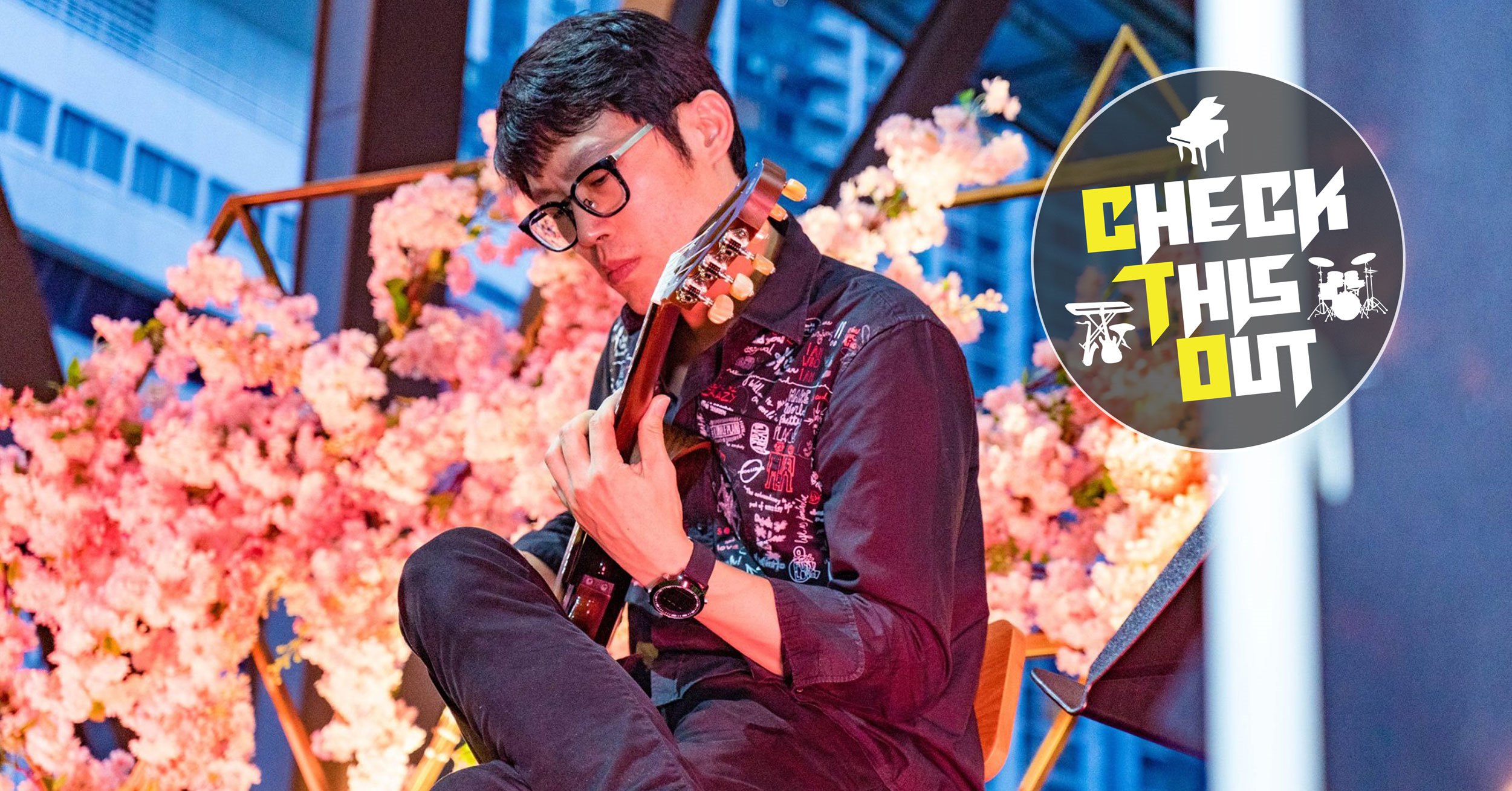 - When did you start picking up learning a music instrument?

I started piano when I was about 8 or 9 years old.

- Who or what inspired you to take up guitar and pursue a career in music?

I took up guitar when I was in college when my good friend asked me to join the guitar club. It developed into a serious hobby and I was totally obsessed and with it. I literally breathed, ate and slept guitar for a good 8 years. The pursuance of a career in music didn’t happen intentionally, and neither was it a calculated process. I had a day job and also started a business after I left the job. During that time I was already playing music part time and making some side income from it. But after my business failed, I decided to take the step to become professional, since I was already doing it and loved every bit of it. After that, everything just fell in place for me. I was lucky to have been exposed to the right people and the right circumstances that allowed me to craft a career out of music.

- What have been the greatest challenges/frustrations of your career so far?

The greatest challenge I faced was to do a concert in 2014 for the re-opening of Victoria Concert Hall after the renovations. It was called Facing Goya, an opera show featuring minimalist music by Michael Nyman. It was the HARDEST music I have ever played. I thought flying a plane was easier. I was so worried after I saw the music scores that I regretted taking up the show. But I made steps to ensure that I was ready for it, and I practised really hard for 2 weeks before the first rehearsal. It turned out fine.

I front my own ethnic fusion band called The SBT Trio. Due to our busy schedules as well as my sessioning work, we have not been able to sit down to write new material and develop ourselves as a band. That, to me, is one of my main frustrations. But I guess it’s a good thing as it means that I am lucky to have jobs and gigs from other sources. Original music in Singapore is sometimes a labour of love. You put in a lot of time and effort but get back very little in return. Well, I hope that in the near future, I will be able to do more with this band.

- Who/What are your main music influences?

I have many music influences since young when I started listening to music. I was into the music of mandopop singers like Dave Wang, Emil Chau, Zhang Yu Sheng, Zhao Chuan etc. After picking up the guitar, I was listening a lot to Nirvana, Skid Row, Guns n Roses, Metallica and a whole bunch of 80’s metal bands, and these bands influenced me greatly in the way I approach rock music. There was also a period of time (about 6 years) that I was heavily into jazz. And during that period, I was influenced by guitarists like Pat Martino, Pat Metheny, Mike Stern, Joe Pass, Wes Montgomery, Chick Corea, Scott Henderson as well as non-guitarists like Michael Brecker (Saxophonist), Yoshiro Okazaki (Trumpeteer), Roy Haynes (drummer) etc.

- What are some of the practice routines for guitar playing?

I separate the fretboard into overlapping zones, while practicing chord voicings, arpeggios, scales etc within these zones (vertically) or across zones (horizontally), using string sets of 3 to 6 strings. In this way, you can see the larger picture and connect the whole fretboard. This will facilitate any guitarist to be able to do what they want to do to execute any music that they want to play.

Other than that, I will practise songs and some licks which I fancy. Learn a lick and play it with different time feel or rhythmic feel, and if possible, in 12 keys ! That helps to build repertoire, especially important for musicians who session a lot.

Always practise with a metronome. I guess everyone has heard someone say it before and I am not re-inventing the wheel. We are after all humans and not machines. We will not be as perfect as the metronome (although there are a good handful of musicians who can do that !). Practising with the metronome will help you reduce your variance of tempo while playing.

- In your opinion, what do you think are the main attributes of a great guitarist?

One of the most important attributes is rhythm, bearing in mind that the guitar is primarily a rhythm instrument before it developed into a lead instrument. Having a strong sense of rhythm and groove is of utmost importance.

Another important attribute is to serve the song and music. No amount of knowledge and licks is of any use if one doesn’t use them to serve the music in the right context, tastefully and effectively. To be able to play simple and yet be effective is definitely not a simple feat.

The third attribute is great tone. You can say a lot more with much lesser notes with a great tone. With a good tone, it’s half the battle won.

-You’ve performed in numerous diverse situations over the years. From backing up stars such as Stephanie Sun & Kit Chan, to serving as the principal guitarist for “The Lion King” broadway musical. How has the experience contributed to your journey as a professional guitarist?

These performances has definitely given me more confidence as well as maturity in my journey. They have helped me learn to adapt to different playing situations, what to expect and what to prepare for. I have also made many new friends, playing with musicians from all over the world. That has helped me open up my musical scope through sharing music with these new friends.

- How would you define success as a musician in Singapore?

Success as a musician can mean different things to different people and it can be a hard thing to measure. To me, success would mean that a musician is able to connect with his audience through his music, whether he is performing his originals or doing covers at a club, and at the same time, being able make a decent living out of it.

- What advices would you give to an aspiring musician in Singapore?

Make a long term goal and take small steps to achieve interim goals towards the end target. Expose yourself to all kinds of music and continue to let it inspire you. Practise a lot. Be kind and genuinely make friends with the community, as you will need to help and look out for each other in your path to become successful.

- Where would we be able to catch your live performances?

I perform every Friday and Saturday at Beast and Butterflies (1930 – 2300 hrs) at M Social Hotel if I am not on tour or doing shows elsewhere. Do check my website for details on my gigging schedule at www.sebastianho-guitar.com