From Made-by-Hand to Industrial Manufacturing

The first pianos were made by hand individually one by one by craftsmen. Although piano music had mostly been confined to the aristocracy, it became popular with the general public following the French Revolution in 1789, and demand for instruments increased. This led to the rapid industrialization of piano manufacturing.

In addition, the music that had previously been enjoyed in the courts of aristocrats was now being performed in concert halls that at the time were built to hold 1,000 to 2,000 people. This, in turn, led to the demand for pianos with louder volume and longer sustain. The strings were strung under higher tension, and a sturdy iron frame began to be used to support them. The age had arrived when individual piano instruments could no longer be made completely by hand.

In the 19th century, the piano industry made remarkable improvements and developments, and as demand increased, increasingly turned to mass production. In addition, as performance techniques evolved and developed, demands related to the touch of the piano keyboard grew. When pianists began competing with embellishments such as trills or fast arpeggios, or by repeating fast passages, they began to desire more sensitive piano actions. In response, a revolutionary new action that made it possible to repeat notes quickly was invented in 1821 by Pierre Erard of France.

In the Age of Chopin and Liszt, the Piano Had 82 Keys

Chopin moved from Warsaw to Paris at the age of 20, and for the next 19 years until the end of his life, his favorite pianos were those manufactured by Ignace Pleyel. Liszt used pianos by makers such as Carl Bechstein and Ludwig Bösendorfer. He was the first composer to make unrestrained use of the expanded compass and increased sound volume.

The Upright Piano, a Novelty Item 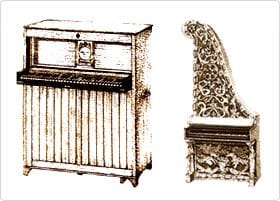 Meanwhile, in the beginning of the 19th century, a compact piano for home use was designed.

In the 18th century, many instruments known as clavicitherium were built in which the strings of a harpsichord where stretched on a vertical frame. The upright piano is regarded as being inspired by the clavicitherium. John Isaac Hawkins, an Englishman living in Philadelphia, succeeded in making the first true upright piano in 1800. Since it took up less space, the upright piano quickly became popular.

Upright (vertical) pianos that were elaborately decorated were also made. The so-called "giraffe piano" is a typical example.

The Perfection of a Piano for the Modern Era

By about the middle of the 19th century, with the era of Chopin and Liszt, the principles of the piano mechanism, and the devices that comprise it, had reached a certain level of perfection. Thereafter, the efforts and goals of piano makers would turn almost entirely to improving quality.

Piano strings became even thicker were wound with wire, and the overall tension also increased. To support these strings, they were now strung on a cast iron frame. On top of that, in seeking a bright, clear sound, the method used to put tension the strings increased the tension to the utmost limit. Further, following the First World War, the standard keyboard compass became 88 keys (7¼ octaves).

In this way, the overall quality, touch, compass, and sound volume were perfected to meet the needs of today's modern era.