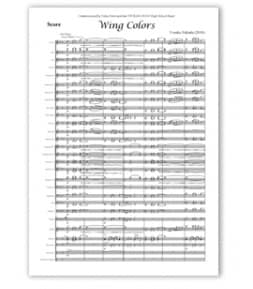 This score was commissioned by Tokyo-toritsu Tsubasa Soho High School's brass band club and composed in 2010.

The main title of 'Wing Colors', together with the sub-titles 'Red Wing', 'Blue Wing', 'Silver Wing' etc. were derived after discussions between Mr Fukuda and the students.

'Red Wing' part rides on a mambo rhythm, 'Blue Wing' pays homage to the people in their youth, 'Silver Wing' refers to the wings of an aeroplane high in the sky. In the recording of this piece in the CD 'CAFUA Selection 2012', the score was performed by the Japan Air Self-Defense Force Central Band. In this recording, you can hear how the music abruptly changes when you get to the 'Silver Wing' part, depicting the flight of an aeroplane. It is a very special performance and listeners are encouraged to listen to this to have an idea of what this piece is about. This score is recommended for competitions, and since it encapsulates pop elements too, it is also suitable as a concert piece.