The First Flight of HENRI FARMAN 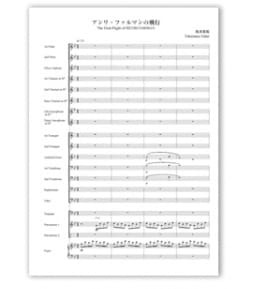 Who is Henry Farman?

Henry Farman is a French aircraft manufacturer who created the model biplane in 1910. In December 1910 Captain Tokugawa Yoshitaku managed to successfully fly the biplane, which was Japan’s first fight in an altitude of 70m and a distance of 3200m. He was born in France with a name of an Englishman and started aircraft manufacturing with his brother Morris. Henry Farman is known as the ‘pioneer’ of French aviation.

The thoughts of the composer model this composition based on “Henry Farman’s aviation’, where flying high with their music will lead the band to new discoveries. The arrangement is for a 20 person performance, however given that most of the harmony, rhythm and base line portions are performed on the Piano, it is possible to perform this piece with a smaller band with lesser people.

This is a wind instrument music piece in which warm hope and expectations can be felt for the future of the young generation.