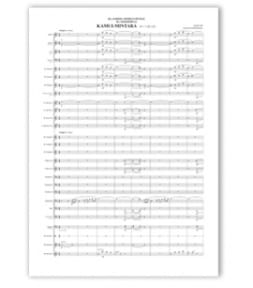 In 2010 the first performance was done by the Ground Self-defense Force Second Music Regiment at the 60th anniversary of the Second Division establishment.

As the first play begins with the curtain rising, the song suggests that something might happen at daybreak. The second play then entwines different solo instruments becomes a tutti, and the god gradually appears. In the third play a grieving Waltz appears and in the fourth play we imagine the gods playing through the ethnical music scales and changing rhythms. The fourth play is also the final act. The song then ends vigorously after the theme of the fourth play which comes after a magnificent passage of play.