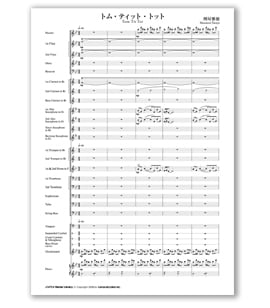 This score is composed based on the English tale of Tom Tit Tot. The same story pattern also appears as one of the stories from Grimm's Fairy Tales "Rumplestiltskin".

The mother of a lazy maiden who ate 5 of her pies lied to the king that her daughter spun 5 skeins in a day, which impressed the king to take her daughter as his wife. The girl enjoyed an extravagant lifestyle for 11 months but on the 12th month, the king shut her in a room and ordered her to spin 5 skeins a day or else get her head chopped off. A little black thing called Tom Tit Tot came knocking and helped the girl spin the skeins, with the condition that she guess his name before the month is up or else she shall have to marry him.

When I read this story, I started to have musical images in my head, and this was the inspiration for this piece. It is an enjoyable piece whether played with a small or large formation.