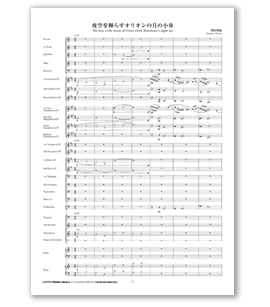 This story is about a bright star in a winter sky, the Orion.
Orion, child of God of the Sea Poseidon, was a strong and powerful hunter.
At one time, Orion fell in love with the Goddess of the Moon, Artemis, another masterful hunter.
They were spending time happily together. However Artemis’s older brother, Apollo, did not like their relationship.
One day Apollo said to his younger sister, "Even though you are a master at hunting, you can’t hit that little rock”.
“No, it is simple”, said Artemis.
She then hit the stone brilliantly with her arrow.
However, she did not hit a rock but her lover Orion instead.
Artemis was overtaken by a deep sadness. She pleaded with Zeus to at least create a constellation of her lover whom she would never meet again.
The mighty Zeus granted her wish and Orion became a star in the night sky.
Even now the Orion sets the night sky ablaze to illuminate the path of his love, the Goddess of the Moon.

This composition is based on the scene describe in the above myth.
I would be very happy if you remember this story and this song whenever you look up at the sky and find Orion.
Work commissioned by Japan Air Self-defense Force Western Air Corps Music.