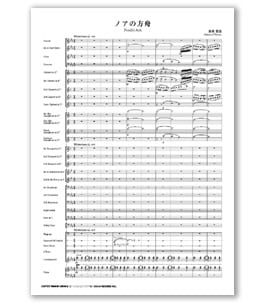 This piece was commissioned by the then adviser to Ichigawa Shiritsu Niihama Elementary School Brass Band Mr Tagawa Shinichiro in 2006.

Noah's Ark is a tale from the Book of Genesis and tells the story of the great flood.

The date is 3000 B.C.
God decided to destroy the world with a great flood because of humanity's evil deeds.
He instructed Noah to build a great ark for himself, his family and all animals.
Everything that did not obey God was annihilated.
The great flood persisted for 40 days and 40 nights.
When the flood finally subsided and Noah and his sons emerged from the ark. God said to Noah that he will never raise a flood like this ever again.
With this promise, a giant rainbow appeared in the sky and Noah, his descendents and the animals that survived created a new world.

The score is separated into 3 parts - the scene where God instructed Noah about building an ark, the great flood and the giant rainbow in the sky that represents hope.
The crux of this piece is to be able to visualise each scene as you play each part.