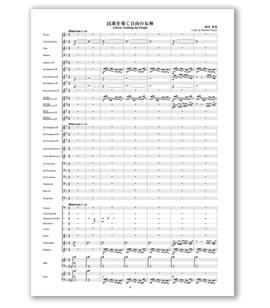 This production was created based on the painting "Liberty Leading the People", by famous French painter Eugene Delacroix. The picture represents the 19th century July Revolution of France and the production itself also follows along the development of the revolution. The theme of Liberty (goddess of freedom) appears throughout the song.

The first part is a quiet 16-note clarinet and saxophone piece which express the uprising of the people in the wake of the revolution; this is represented by people with brass musical instruments in hand which represents the weapons. A, vividly portrays the goddess who guides the people with a trumpet theme. B is just before the revolution begins and each note shows the people's tension and nervousness. That tension is released in C and the revolution begins. Theme of the clarinet resounds like the hustle and bustle of the city. In the middle of that theme the rising flute and piccolo intensify the revolution. In between that hustle and bustle from G a brass chorale delineates the people who continue the fight with weapons in hand. In H the revolution ends and for the second time the theme of the goddess appears with a solo euphonium which illuminates the piece like a warm ray of light. Before long the solo is taken over by high-pitch toned oboe, horn, trumpet and tuba and the goddess theme is repeated. The piece ends magnificently with the freedom seeking revolution ending and with the goddess as a symbol of a bright future that the people walk towards.