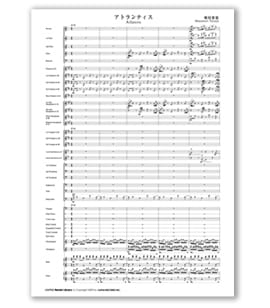 It is said that 12,000 years ago, there was a huge continent called Atlantis in the Atlantic Ocean.

Atlantis was fighting with the Athens Empire over territorial conflicts. Zeus decided to punish them with natural disasters. Atlantis disappeared into the ocean after a massive flood and earthquake. The score describes the atmosphere from just before the great flood when rain starts to fall.

The great flood is signified by the hastening of tempo. There is a trumpet solo at the later half, which depicts the fascination of explorers who continue to search for Atlantis even today.

This piece was commissioned by Takarazuka City Brass Band.