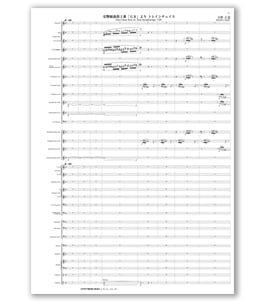 This production was reorganized and rearranged as an orchestral piece for a large scale wind instrument composition by the composer himself over a period of seven years from 1992. The original production was for an Original Video Anime called ‘Giant Robot’ which Amano Masamichi was in-charge of the sound track (Original Work: Kouki Yokoyama, Supervision: Yasuhiro Imamura, Producer: Phoenix Entertainment, Bandai Visual, Sale: Amuse Video).

Regarding this series of Symphonic Suite, Amano said “I wanted to make a pure music production which is separated from the video”. This was not taken from the sound track as it is.

The first performance of [No. 2 Symphonic Suite from GR] was held by Director Toru Asada in the 27th Hamamatsu Symphony Brass Band Concert at Act City Hamamatsu Hall on 7th May 2000.