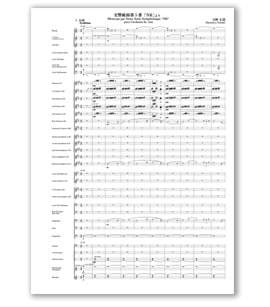 When talking about Masamichi Amano's music, it is hard not to talk about the accompanying animation. In 1998, one year after the end of the mega-hit Giant Robo, an original video animation series based on Yamada Futaro's work called the Makai Tensho was developed and this score is a rearrangement of its soundtrack. The "NR" in the title is the abbreviation of "Ninja Resurrection", which is what it is called in the overseas version.

This piece was first performed by Musee d'Art harmonie on 28 June 2003 and directed by Masamichi Amano himself.