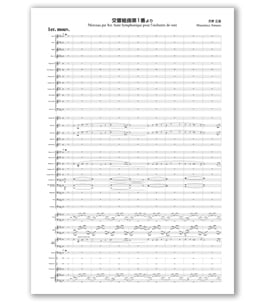 We have extracted part of a musical composition from 1994, reconstructed and rearranged it to suite a large-scale wind instrument formation with a total of five movements.

In other words, Flute 1,2, Oboe 1,2, Solo Clarinet 1,2, Bassoon 1,2 are in solo wind instrument group. During performances it is a specification of the composer to arrange these 8 sections in front of the tiered stand.

In addition, the reconstruction and rearrangement mentioned in the beginning was commissioned by Soka Citizens Brass Band based in Saitama Prefecture. Composer himself directed the first orchestral performance on 10th November 2002.