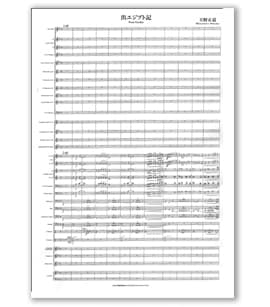 The theme of this song is inspired by the ‘Exodus from Egypt’ taken from The Old Testament in the Bible. Because I have worked with music videos, rather than just converting the contents of The Old Testament into a poetic symphony, I wanted to write a film song for a fictional movie based on the Exodus. I would like to introduce a little bit about my fictional film.

In my brain this is how the movie begins.

The song starts with a bird’s eye view of the majestic Sinai Peninsula whose vastness is signified by the Brass Chorale Fanfare. The chord progression becomes increasingly intense just like sunlight pouring from the breaks in the clouds which magnifies the divinity of Yahweh the Almighty and His omniscience. At this point, the main title will be displayed. To signify the delineation of the Israeli people who were held captive, the song changes to a dark quieter tone.

This movie also promises a hero who is determined to fight the war and rescue the people (1000 extras will be needed). Music: Allegro Con Fuoco.

The fight continues! But as you would expect, a heroine enters and a love story begins to blossom; this is signified by a Flugelhorn and Trombone solo. Unfortunately, our hero falls from a cliff in the midst of a perilous battle and loses his life (as expected once again). The heroine rushes over to him and she is overwhelmed with sadness. This scene is backed by a quartet of woodwinds. Once again, the clouds break and sunlight pours through and as it lands on the hero, he comes back to life by a miracle of Yahweh (again as expected!). This sequence will be covered by the opening chords but with an advancement of 4 degrees.

Allegro starts again where a solo Euphonium expresses its wide range. Israelis starts counter-attacking and they manage to leave Egypt as they witness the miracle of Yahweh when He divides the ocean.

Because of space constraints, the second half is cut short. Generally I would like you to listen to it as a song of a 70mm cine scope film.

This song was conducted with the Tokyo Metropolitan Nagayama High School Brass Band at the Tama Brass Festival in 2000.