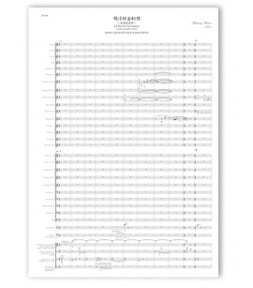 This piece pulls together many Japanese elements, a forte of Amano's. To people who are familiar with Japan, and even to Japanese themselves, this may sound like an exotic piece even though it contains both Japanese and Western styles. A piece that truly represents of Amano's world.

Azuma Kagami is a historical text from Kamakura Period and En Bu Da Gon refers to the gold dust associated with the principal object of worship at Zenkoji Temple, although Amano has stated that this piece is not literally about gold.

Players with some knowledge of early Japanese music should be able to understand this piece better. It may be helpful to do some prior research and listen to sounds associated with ancient Japanese court music gagaku, traditional arts like Noh, Shou (a woodwind instrument), Hichiriki (a kind of flute), Noh flute, bamboo flute and even instruments that make use of Buddhist chants and ritual objects.

Under the Score Browsing Service (still under construction), you are able to view all the full score. This score has a unique ending, so be sure to listen and read the score at the same time.

* 裡 is an irregular form of of the character 裏. Both characters have the same sound and meaning. (Refer to CD booklet or explanations on scores)