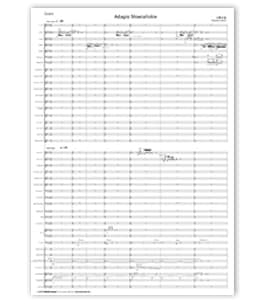 The specified tempo of this production is Molto Adagio, something that the Japanese are weak at. The performance time of this production is a weak 9 minutes with only 60 bars in total. This performance is in a very slow tempo with ¼ Note = 28. Nowadays, it is hard to find a wind instrument composition of this tempo though this tempo was preferred by artists such as Beethoven and Mahler. Recent performances adopt a much faster tempo. However if you perform at the designated tempo, it is possible to express the song in a deep and significant manner.

The above work is commissioned by Seiji Sagawa of Goulart Wind Orchestra. Further, “II” was added to the title by Bunkyo University Brass Band. The intermediate part of this musical composition has been revised.