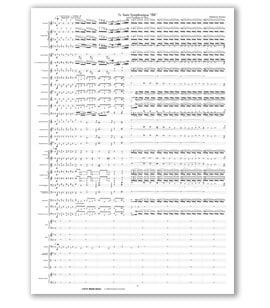 This production was published in 2000 on behalf of Toei with the supervision of Kinji Fukasaku as the original sound track of the movie “Battle Royale” (Music: Amano Masamichi). It is something that has been rewritten for a large scale brass band organized by the commission of Toyama Minami brass band. The composer himself has made all the reconstruction and arrangement as an orchestral work.

The song consists of 11 movements that begins with composition of "Requiem (Messa da Requiem)" from “Day of Anger (Dies Irae)" from the Verdi and then enters Amano’s own music. A gruesome scene is depicted with a great sense of urgency whilst the rhythm adds a cacophony of confusion and an antonym used beautifully as a melody. The theme of the movie is a satire of modern society. It is a production in which you can feel the soul and accompaniment of the movie’s music.

Premiered at the 30th All Japan Band Competition: Toyama Prefectural Tournament held at Tonami Cultural Centre. It was conducted by Makino Makoto with the Toyama Minami Brass Band.