Prometheus - The Song of Songs 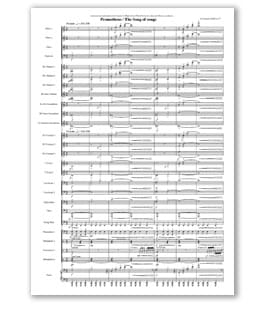 This was a commissioned work for Daiichi High School Brass Band in Sendai, Miyagi-Ken. It was first performed under the direction of advisor Mr. Kanno Junichi.

The band consisted of about 25 people and most of them were beginners but with lots of skill. Because of that, the aim of this composition is to show ‘various music schemes without a high degree of technical difficulties’.

The ‘existences of fire that fuels the mind’ are likened to Prometheus who brought fire to the human kind. In addition, the title of the song includes the feelings of a praise song which includes the word derivation of Prometheus’s name ‘pro (before) metheus (who thinks)’and furthermore it includes the meaning of ‘Song of Solomon’ which is ‘Song of Understanding = Song of Love’. So, it does not mean that the Greek mythology is directly involved in the song.

Also, the entire composition is arranged in a short rotation of rhythms in addition to quoting the ‘longing for the source of knowledge’ in the ancient Greek era.